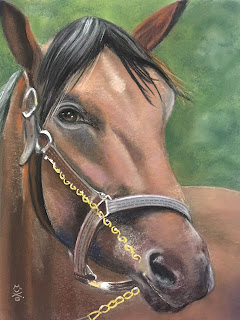 American Pharoah won the American Triple Crown and the Breeder's Cup Classic in 2015.  He won the four races becoming the first horse to win the Grand Slam of American Horse Racing.  I live about 1/2 hour away from Belmont Raceway and wish I could've seen him in person...but it was so exciting watching him on television!!  He is definitely a handsome boy!!
at 12:22 PM