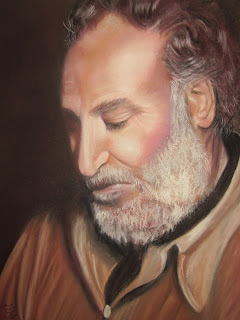 Ted DeGrazia became one of Arizona's most prominent
painters.  He lived most of his life near Tucson and worked in his studio that he called "Gallery in the Sun".  This is where I visited his work.  He's known around the World for capturing the spirit of the Southwest and its people.  I fell in love with his face and needed to paint him in pastels..
at 9:57 PM 122 comments: