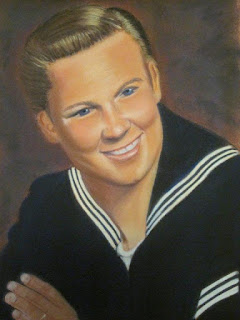 This is my brother-in-law, Joe, at
the age of 21 when he was in the Navy.
After leaving the Navy he became a
Policeman...then he worked as a uniformed
secret service officer in the White House
during the Kennedy Administration. How
proud am I ?! The original reference
picture was in black and white so I colorized
it a bit!. He still looks as handsome as he did when
he took this photo.
at 12:30 PM